Churches in the Rossville, Kansas, area.

Among the various cultural developments in Rossville none was more important than the establishment and growth of organized religions. Shortly after the village of Rossville was started in 1871, some of the settlers felt the need for a church. The first known organized church was the Baptist Church started in August 1871 with nine members. A newspaper account, dated May 1879, about the school house in town says, “…at this time the building is used on Sunday by various church denominations as they are not supplied with church buildings. Six denominations have organized: The Baptist, Presbyterian, Christian, Methodist, Episcopal, Methodist Southern and Advent. The Baptist have begun to erect a neat frame church building.” The Baptists built a small church on the approximate site of the Joe Navarre home on Spruce Street and dedicated this church on February 29, 1880. For a few years after that the Baptist, Christian, Presbyterian and Methodist shared this building—each having the use of it one Sunday a month, morning and evening. The Baptist church disbanded in 1910 and was torn down soon afterwards.

Organization of the United Brethren was soon followed by the United Brethren Church, also known as the Olive Branch Church. The first church building in the community was built by its members in about 1877. The old landmark, five miles north of Rossville, was torn down about 1952. Some of the farm folk responsible for its organization and erection were Mr. and Mrs. Joe Franklin, Mr. and Mrs. Fred Franklin, Mr. and Mrs. Marion Lasswell, Mr. and Mrs. Lambert James and their sons, Robert and James, Mr. and Mrs. W.V. Hook, who donated land for the church. A decline in membership prompted the church officials to sell the building to the Czech Christian organization and it served as a worship center for many years.

Other denominations organized early, which have little recorded history, including the Colored Baptist, also called Second Baptist. A news clipping shows the Colored Baptist Church was in existence in 1885 and meetings were held at the old school house. At that time they were endeavoring to raise funds for a structure of their own. It was later erected in the southeast part of town on Orange Street. Their building was repaired in December 1904, but soon after the church disbanded.

The only information available about the Cambellites, followers of Alexander Cambell, shows that they gathered regularly early in the city’s history. The Cambellites here and in other localities were the forerunners of the early Christian Church. A church was organized with the name Church of Christ in 1872 with Bennet Swearingen, an elder. In 1879 a group was meeting in the school. Between 1880 and when it was decided to build a church, it is believed the members met in the Baptist Church. A deed was recorded on June 29, 1887, for three lots for which they paid $50.00. The exact date of the erection of the present church is not known. Revered Alex Montgomery was a stone mason and laid the church foundation. Charles Bixby, father of the late Albert Bixby, was a carpenter and supervised the building of the church. Lumber was hauled from Topeka by Alex Nadeau and others. The supplies were purchased from the Thomas Lumber Company at Topeka. The first funeral held in the church was for William Lacock, grandfather of the late Albert Bixby. The oldest Sunday School record is dated September 7, 1884, with May Parker its first secretary.
Due to an increase in the Christian Church's membership, in 1949 a large room was added to the north side of the building. Other improvements included new colored glass in the windows, and pews from the old United Brethren Church. In December 1960, another addition to the building was completed.

As more settlers moved to this community, those who were of the Presbyterian faith organized their group in 1878 and met in the school in town. Reverend E.P. Sempel was the first pastor. A.C. Sherman, Richard Binns, Daniel Wilt, J.C. Bradley, William Bond, Henry Kassebaum, W.M. Mitchner, Sam Kerr, Dr. H.H. Miller and Isaac Trostle were the founders of the church. Later the Presbyterians met in the Baptist Church. In 1883, the Presbyterian group purchased the land on which the present church stands and began to build. The first church was built of red bricks which were made at a brick kiln located at the east edge of town. As the years passed a crack appeared between the bricks in the east end of the building. This fault was used as the reason for tearing town the old building. The present structure was constructed in 1917. The Reverend J.H. Naismith, the originator of the game of basketball, served as pastor in 1922 and 1923. Mr. Gus Kassebaum served as a Trustee for 39 years, from 1915 to 1954. His wife, Mrs. Lula Kassebaum served most of these years as president of the Ladies Missionary Society.

The Rossville Charge was organized in the James School House, three miles west of Rossville in the year 1872 under the leadership of Mr. Paul Strimple, a local lay preacher. Shortly afterwards, another group of Methodists (Southern Methodists) met in Rossville and had services at the school in town. These two groups joined in planning construction of a church. Since the Baptists were the first to build a church, the two Methodist groups shared the building. The Methodist Church was chartered and registered with the Secretary of State, June 13, 1881. The first trustees and signers of the charter were: W.G. Gilbert, Isaac Larrance, Joseph Andrews, J.W. Miller, A.E. Strimple, J.T. Heslet, and T.M. Attebury. Building of the new church began in 1884, and it was dedicated on March 1, 1885. Nine years later the south room was added, and it was used as a dining room and meeting room. The Sunday School addition was added in 1960. The name was changed from Methodist Episcopal to Methodist, October 11, 1939. It was again changed in 1968 to United Methodist when the United Brethren and Methodist merged. The Election Day dinner was first served in 1882 and has become an established tradition. Dinner and supper were served to over 175 persons at a cost of 25 cents per person. Some of the men who took an active part in the life of the church were C.E. Gresser, E.G. Griswold and Frank Strimple.

Before St. Stanislaus became a reality, according to Ellen Leonhardt of St. Marys, Kansas, Mass was held monthly sometime before 1894 in the Fritz Hall. She remembers accompanying Father Krier, a Jesuit priest, from St. Marys to Rossville along with other girls to sing in the choir. The first St. Stanislaus Church was built under the auspices of Father John B. Kokenge, S.J., who collected about eleven hundred dollars to procure the ground and put up the structure. It measured 42 x 30 feet with a sanctuary that added twelve feet to its length. The corner stone of this mission church was laid by Bishop Fink on June 18, 1899. Many notables from the St. Marys College were present as well as Reverend H.A. Schapman, S.J., former president of Detroit College. The document placed in the stone contained the following: “Leo XIII being Pope, William McKinley being President of the United States, W.E. Stanley being the Governor of Kansas, Joseph Calvin Bradley being Mayor of the city of Rossville, this church to be erected to the honor of God under the invocation of St. Stanislaus Kastka was begun today when the corner stone was laid this the eighteenth day of June in the year of our Lord Eighteen hundred and ninety-nine.” The dedication of the completed church took place on October 29, 1899. In 1967, the parish purchased the home across the street from the church, so that the expanding catechetical classes would have a better place to meet. A $20,000 renovation project in 1975-1976 added a brick extension to the front of the church and a full basement. In 1998 Dekat Hall was dedicated and the mortgage was paid off. By 2009 the parish, which encompassed Rossville, Silver Lake, Willard, and Maple Hill, was in need of a bigger building so Don & Kathleen Damon donated a $1.1 million gift for the building of a new church. After raising the additional needed funds, the new worship space for 400 people was built in 2012 near the former church.

In the early 1950s a group of believers who met together for weekly Bible Study grew in number so that they were encouraged to secure a property, call a pastor and organize a church. The Stewart property on the corner of Main and Pottawatomie was purchased in June 1952. After renovation, the first services of the Rossville Bible Church were held on September 7, 1952, with Reverend Clarence Swihart as pastor. Reverend Floyd Gee became the second pastor in June 1954. The church purchased a building site from the Hesse family that adjoins the Grade School in August 1960. Reverend Hugh Gardner, Wichita, superintended the construction of a basement to be used for an auditorium. A building was moved from Forbes Air Force Base and set on the basement. June 7, 1970, was a day of rejoicing for the congregation as they had a mortgage-burning service with Reverend Joe Arnedd, Des Moines, Iowa, evangelist, as speaker.

Thus is the history of the early churches which no longer exist in the community and the churches which continue to function--though in somewhat different roles than in the early years. Once, the church, as well as the school, was the center of most family activities.

Public Domain due to copyright expiration. Original narrative content by RCL is available for use by public. 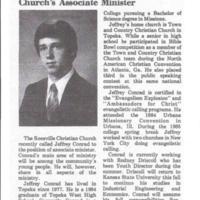 The Rossville Christian Church recently called Jeffrey Conrad to the position of associate minister. Conrad’s main area of ministry will be among the community’s young people. He will,… 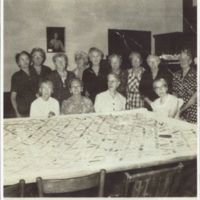 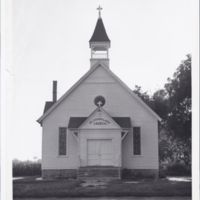 The corner stone of the St. Stanislaus Catholic Church was laid by Bishop Fink on June 18, 1899. The dedication of the completed church took place on October 29, 1899. 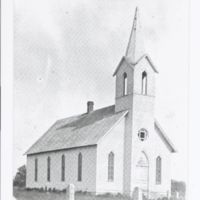 The United Brethren Church was the first church building built in Rossville, Kansas. It was built about 1877. The old landmark, five miles north of Rossville, was torn down about 1952. 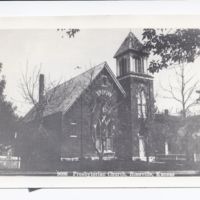 As more settlers moved to the Rossville, Kansas, community, those who were of the Presbyterian faith organized their group in 1878 and met in the school in town. The church in the picture was built around 1883. It was made of red bricks which were… 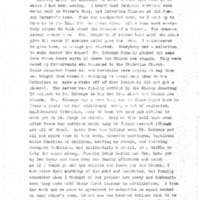 HISTORY OF ST. STANISLAUS IN ROSSVILLE
(As written by Miss Frances DeGraff)

Shortly after the holidays in 1989, I came home from K.C. where I had been sewing. I heard that Catholic services were being held in Fritz's Hall, and Catechism Classes…

The Baptists in Rossville, Kansas, built a small church on Spruce Street and dedicated this church on February 29, 1880. For a few years after that the Baptist, Christian, Presbyterian, and Methodist shared this building—each having the use of it one…

Group of people in front of old Rossville Presbyterian Church 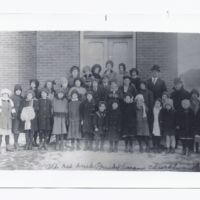 A group of people, mostly children, gathered in front the old Rossville Presbyterian Church in the winter of 1914. The old Presbyterian church was built around 1883. It was made of red bricks which were made at a brick kiln located at the east edge… 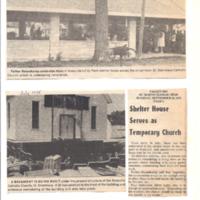 VALLEY HO!
ST. MARYS [KANSAS] STAR
TUESDAY, SEPTEMBER 16, 1975
PAGE 5
Shelter House Serves as Temporary Church
Since early in July, Mass has been celebrated in the shelter house in the city park of Rossville, and sometimes under a large tree in… 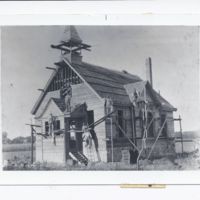 The corner stone of the St. Stanislaus Catholic Church was laid by Bishop Fink on June 18, 1899. The dedication of the completed church took place on October 29, 1899. Pictured left to right are Joe DeGraff, Charles Bixby, Mr. Roberts, Ben Mileham,…
View all 150 items