Doug French rides his Palomino with his "pay sack" on his back. The Rossville United Methodist Church is ready to start its annual "Pony Express" for church pledges. Photo by Belinda Driscoll.

“Let’s Ride” will be the slogan next Sunday for the members of the Rossville United Methodist Church, who will be making the annual Pony Express Stewardship Run.
The Pony Express Run this year is being conducted one day only, January 30, unlike the past two runs, which spanned several weeks.
The relay of the saddlebags among our members will start at 1 p.m. Sunday, following the Reverend Damewood commissioning the Trail Bosses in the morning worship service. Designated trail bosses will supervise the relaying of stewardship “saddlebags” to all of the church’s families on Pony Express routes.
The names of 10 church families are written on a run route list on each saddlebag. A family fills in an estimate of giving card, seals it in an envelope and inserts it in the saddlebag, which then is hand-carried to another family on the route.

Besides helping raise the church budget to finance needed programs of ministry and service, the Pony Express has helped everyone get to know each other better.
The church has been engaged in an active timetable the last few weeks leading up to the Run. A Chuck Wagon Dinner was January 23. Everyone wore western attire to the church services and then to the dinner. The children have been involved with the Pony Express through the Sunday School.
The Run the youth and the adults have been working on is based on teamwork, the same concept employed by the Pony Express more than a century ago.
For more information, contact the general manager of this year’s Pony Express Run, Doug French. 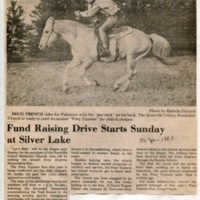