Hoge station was a stop on the Lawrence-Leavenworth branch of the Union Pacific railroad. It was situated on the southeast corner of what is now 179th and Hollingsworth road. Holy angel Catholic Church, and later St. Patrick's Catholic Church, was located 2 miles south of the station at 179th and Leavenworth Rd. in the middle of Holy Angels Cemetery. The brick gothic structure was dedicated on St. Patrick's day, March 17, 1914.

According to Perry Walters in his book, Ghost Towns, "St. patrick's had blue gas light, steam heat, a gothic arch, a reed organ given by Father Kelly of the Cathedral of Leavenworth, antique windows, and Mrs. Klament of Stranger Twp. donated the altar. There was a parsonage connected to the church by a covered causeway.

This church was destroyed by fire Dec. 28, 1923 and a new church was built in the city of Basehor to replace it. 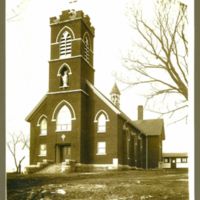